The Early Days
The City of Solon began as a parcel of the original Connecticut Western Reserve Territory. The first settlers, sea captain Jason Robbins and merchant Isaac "Samuel" Bull, chose land on either side of what is now Aurora Road near Grantwood Golf Course in 1820. The first school was established in Solon in 1822, with 7 pupils. 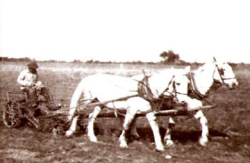 Post-World War II Expansion
In the early 1950's, Mayor Edwin Carter acted on his vision of what the then sleepy little town of Solon could be. He persuaded voters to pass strict zoning codes to control expansion, and, in a decision that shaped the future of the community, set aside 2,200 acres of land for industry. This move, combined with a vigorous recruitment program for good, clean industry and business has helped keep Solon's tax base low and its services to home owners high.

Solon Becomes a City
A large growth spurt followed this period in Solon's history and the town became a city on December 5, 1960. Residential growth grew by leaps and bounds. The 1970 population of 11,147 jumped to 14,341 in 1980 and Solon's most recent estimated population is almost 23,000. In 1987and 1994, city planners and the voters once again helped to shape Solon's future by passing an increased lot size ordinance, which has effectively slowed the rate of residential growth for new housing.

City officials believe the population will top out between 25,000 and 26,000 citizens (instead of 40,000 under the old zoning), a workable amount which will be planned for in terms of city services, schools, programs, and means of transportation.

The Future of Solon
So where is Solon headed in the future? The dawn of the 21st century will see us with new facilities that can more effectively meet the needs of our residents.

Whatever happens in the future, it is safe to say the residents of Solon will continue to be a major part of its planning and progress.